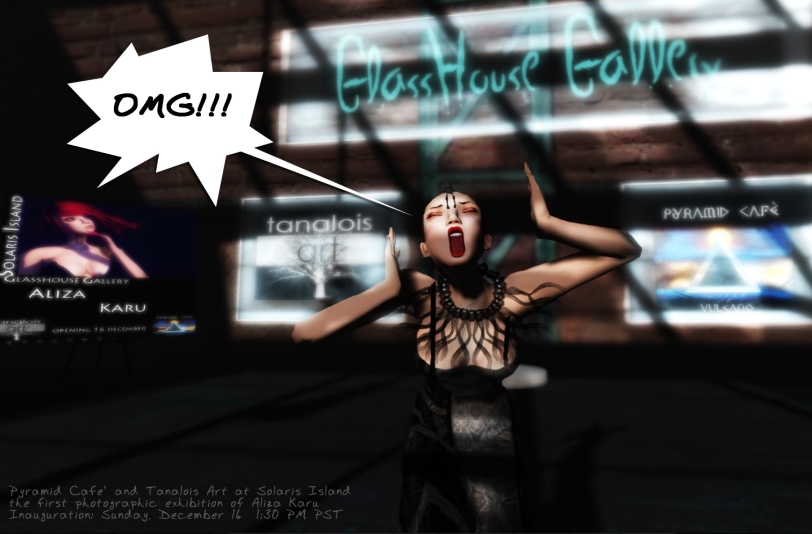 Pyramid Cafe’ and Tanalois Art
at Solaris Island
have the pleasure to invite you
at inauguration of the first photographic exhibition
of Aliza Karu
Inauguration Sunday, December 16 1:30 PM PST
maps.secondlife.com/secondlife/Solaris%20Island/25/50/2851

…I don’t know how to write my own biography. And maybe, actually, it’s a nonsense since in RL I’m a journalist and editor… LOL!I joined SL in 2008. The main goal was to promote RL business like graphic and communication, and immediately I discovered SL wasn’t just a game (as it is usually advertised) but a social network 3D with wery high potentialities.While following often virtual cultural activities, I’ve never been a virtual artist and I’m honored that crazy gallerist of Tani has chosen to exhibit my photos, which do not start from a concept art, basicly, but… self-promotion.In fact, exihbited photos have been made to show my dresses, skins and accessories. If then they appear emotional, yes, that’s one of my goals.in SL I’ ma dseigner. Haute couture, they say (I don’t really follow fashion so it could sounds an offense to me ihihih). I prefear to say about myself I’m crazy and gothic, with a drop of punk. I love to go beyond schemes: why to dress in SL as well as you dress in RL? I like to dare, to challenge my limits as well as SL limits, to give birth to my creations from a plan, shaping it and so on while, sometimes, getting real wearable installations.

One thought on “_Aliza Karu at Solaris”